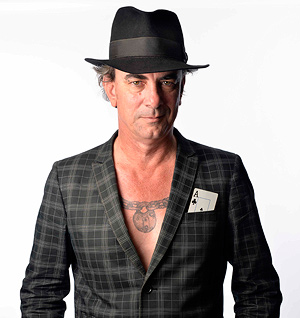 Tony Roberts is a wise-cracking, highly amiable sorcerer from Australia. This occasional escapologist now finds himself in Edinburgh performing some amazing, & I mean amazing, card tricks. After twenty minutes of funny introductions to his life & world – like the time he asked his wife to play a game – guess the flavour of his flavoured condoms, & she said cheese & onion & he said he hadn’t put one on yet – he asked two members of the audience onto the stage to be his assistants.

There follows a series of card-tricks that literally leaves the audience gasping. He has the ability to click his fingers & change cards right before your eyes. The highlight for me was after a comprehensive shuffle of the deck, he managed to deal out in sequence every level of hand in texas hold em poker, concluding with the final hand of the 2005 World Series of Poker.

Tony’s comedy is a little bit dodgy at times, & occasionaly he finds himself the only one laughing in the room. ‘That one’s for me,’ he’d quickly quip & swiftly move on with his show. But it hardly matters, for his magic is the true star of the show, or should or say FIVE STARS.