Skip to content
HomeConor Drum: All My Friends Are Dead 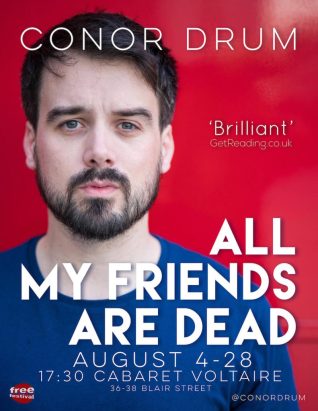 Nestled in a pigeon hole which looks as if it’s Cab Vol’s flyer distribution office the rest of the year I find myself awaiting Conor Drums (@conordrum) one man show.  The venue is packed to the rafters (Capacity: 25) and the audience are keen to discover whether this slice of Free Fringe will prove to be worth throwing money in the bucket or throwing another hour of your life away.

Dubliner Conor quickly settles into his obcom routine, a skilled raconteur he rarely stumbled on words and in such an intimate venue his story-telling style worked well with the proximity aiding eye-contact with the audience  He’s a young  35 and this mirrors in the comedy staples that provide his material (is there anyone who doesn’t do a joke on dating websites?).

The title of his show refers to watching all his friends get married off and that he’s got hardly anyone left to go out on the sauce with to be his wingman with the ladies.   Housemates,snoring (she sounded like Darth Vader swallowing an apple) testicles, cheese, heroine and Netflix get covered but it’s his story about the stag do in Prague that is the most skilfully written and performed and also gets the biggest laughs and, you suspect, is probably true. I wish I had got the contact details.

He’s no Fringe virgin having been coming since 2012 and was completely unawed by an intimidatingly small venue and yes- I did put my money in the bucket (pint glass actually).