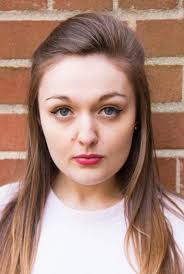 Hello Vicki, so where ya from & where ya at, geographically speaking?
I’m from Dartford in Kent. I’ve spent my whole life in Dartford. I still live in Dartford. My ancestors have been living in Dartford since the 1800s. It’s right on the edge of London so its not as pretty and green as most of Kent, it has a bit more…character.

When did you first realise you were, well, funny?
When I was a kid I used to always dress up and do silly voices and characters to try and make my big brother and sister laugh. I used to do a granny character when I was about 5; I used the halves of a Pokeball as fake boobs and used to hobble about saying ‘Cor blimey it’s like a cattle market in here’. It was some of my best work.

What does Vicki Sargent like to do when she’s not being funny?
Watch TV and films and stay in. I’m a complete telly addict. The quality of Netflix is better than any club in my opinion.

Why stand-up comedy?
I’ve always been a big comedy fan, my dad raised me on great comedy like Blackadder, Billy Connolly, The Fast Show, Monty Python, Morecambe and Wise and so on. So I always loved it and thought it looked so fun but didn’t really think I was funny enough. I went into acting and always got comedy parts. I then met Jen Wakefield doing a comedy play, we got on really well and she asked me if I’d ever want to have a go at doing sketch comedy. Going into comedy with someone else helped me make the transition and I loved it! I then took Logan Murray’s Stand Up course at the beginning of last year and that was brilliant and got me another step closer to finding my voice.

You have both acted on stage & appeared in films. How do these experiences aid your performances as a comedian?
A lot of my comedy is character based, I do lots of cartooning and voices and that has certainly been strengthened by my training in acting, voice work and accents. The first acting course I did was actually an Accents for Actors course and that awoke my passion for silly voices. Also just having that confidence and stage presence that comes with acting is really helpful when performing comedy. 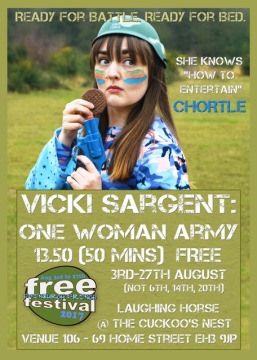 You are bringing your show One Woman Army to the Fringe this August, can you tell us about it?
One Woman Army is a storytelling comedy show. I tell and act out stories from my life and play all the characters within them. A couple of years ago I was diagnosed with severe anxiety and this show started as me thinking about all the things that stress me out so I talk about awful retail jobs I’ve had, bad dating experiences, feeling out of depth in the acting world and the joys of living in Dartford. It’s basically me having a very relatable, witty moan about things. I perform the whole show in my dressing gown and it centres around me watching telly on my sofa and eating snacks. I share biscuits with the audience when they arrive so they feel all nice and cosy, because I certainly am!

How are things going so far?
Good! There are of course highs and lows but thats to be expected with the Fringe. I’m just happy if people enjoy my show and so far audiences seem to really like it…or maybe they just like the biscuits. Either way I’m chuffed to be a part of the most exciting festival on the planet and to be making wonderful friends all whilst making people laugh along the way. It definitely beats working on a meat and fish counter which you learn all about in act one.

Last year Vicki performed at the Fringe as part of a double act in ‘Jiggle & Hyde’ with Jen Wakefield. This year you are both going solo. What has been the motivation?
We just can’t stand each other. Only joking! Jen and I are still the best of friends and we are actually sharing a flat together for the Fringe. We both wanted to explore our own unique comedy voices and have a go at going solo. It’s really great because we are so supportive of each other. I’m a huge fan of Jen’s work and it still feels like we are part of a team, we just have our own shows. But don’t tell her I said any of that.

Can you describe the experience of performing at the Fringe in a single sentence?
It requires lots of resilience, strength and comfort eating but a good show makes it worth all the calories.

What does the rest of 2017 hold in store for Vicki Sargent?
I’d like to start working on my next solo show and try to get a head start. I’ve already had some ideas so I can’t wait to get gigging and try them out. Also theres loads of great telly coming on in the autumn so I can’t wait for that.

You can catch Vicky right now at the Fringe

One thought on “An Interview with Vicki Sargent”