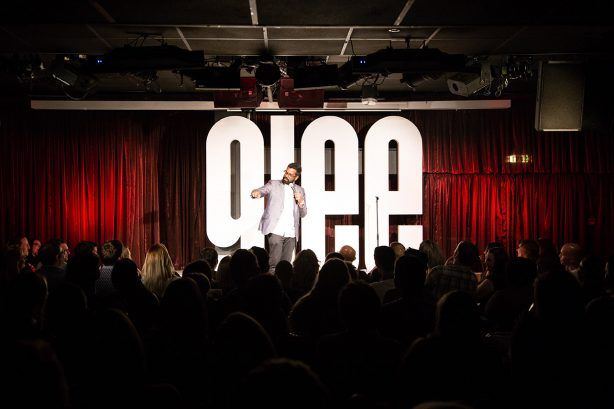 As a long-time fan of Glasgow’s stand-up scene, I found myself pleasantly surprised when I attended the Friday Night Comedy show at the city’s recently opened venue The Glee Club. An established stand-up staple in Birmingham, Cardiff and Oxford, The Glee Club’s expansion to Glasgow provides an exciting opportunity that bridges the gap between the more intimate comic experiences exemplified by The Stand Comedy Club and larger, theatrical venues, a point made by legendary Glasgow comic Gary Little. Between generous pitchers of beer and snacking on my mate’s plate of nachos, I found the overall experience pretty impressive.

Scott Gibson
The March 1st show was hosted by the effortlessly hilarious Scott Gibson, and featured (in sequential order) Rosco McLelland, Eleanor Tiernan and Ben Norris. Having seen Gibson killing it numerous times at The Stand, I found him to be a brilliant host, who masterfully whipped the crowd into a fury before each act with his grounded, self-deprecating comic wit. Gibson’s confident, reassuring demeanour also helped to remind his audience to be respectful to the incoming acts, while containing the enthusiasm of some rowdier elements of the show’s audience, a disciplinary edge that I’ve found unfortunately to be lost on many hosts. While hardly an easy task in such a large venue, Gibson exuded an excellent energy that continually drew the crowd in.

Rosco McLelland
Rosco McLelland gave an energetic performance as the show’s opener, but his material paled in comparison to the elegance of Tiernan’s act and the vibrancy that Norris projected as the show’s headliner. Having seen McLelland do brilliantly in smaller rooms like The Stand, I felt his lukewarm performance was perhaps partly due to the sheer size of The Glee Club, but also possibly a natural reaction as a performer getting used to a new space. As a pathway between low-ceiling stand-up rooms and Apollo-like theatre spaces, I couldn’t help but feel that it’ll be harder for subtler acts to project their acts at The Glee Club as effectively as headliner performers. Showing moments of great comic insight, perhaps McLelland will feel more settled next time around.

Eleanor Tiernan
Reflecting on the show’s final two acts, Eleanor Tiernan and Ben Norris dazzled the audience with their performances. In her effortless dalliance between more observational moments and socio-political commentary, she peppered her act with questions over the MeToo Movement, the difficulty of having a vagina (which she brilliantly compares to a piece of 1980s machinery that works, but is always leaking when you don’t expect it), and the role that women play in promoting a more nuanced understanding of female identity. While I have a particular leaning towards more socio-political comics, I have to say that, even in its lighter moments, Tiernan’s act was a delight to watch. Her appearance at Friday Night Comedy clearly illustrated her enviable talent as a headliner comic, and I really hope to see her again.

Ben Norris
As the show’s main headliner, Ben Norris’ explosive stand-up routine made for a fantastic finish to the night, brimming with intelligent and penetrative observations on British culture and life as a father. Weaving his material with some brilliant moments of crowd-work, his deliciously confident, likeable energy lifted the show to new heights, and made for some fantastic moments of crowd-work with the crowd, particularly when he found himself struggling to understand sections of his predominantly Glaswegian audience. In one brilliant moment, after failing to understand a woman’s name in the front row (referencing her as “Laun” instead of “Lauren”), he developed this incomprehension into a clever joke on how much easier life must be in Glasgow when you just remove the middle of each word. Bringing a rock-star dynamism to the venue, Norris truly shone as the show’s headliner.

Reviewing the club more broadly, one major strength I think The Glee Club will bring to the Glasgow comedy scene is its employment of security staff. Having seen numerous shows ruined beyond belief by hecklers, their subtle presence in the backdrop of the audience was a very welcome addition. I also felt that the show’s provision of food and pitchers balances well with the needs of the stand-up performances and in avoiding any possible disturbance it could cause to the shows. While I typically view the inclusion of food at a stand-up venue as a poor sign of the show’s management – a profit over performance indicator – The Glee Club pulls it off well, ensuring that people can order food and drinks at the bar while avoiding any tab system that could disrupt the flow of the acts while the food is being delivered. However, a small criticism I’d make about it would be the near-deafening preamble music played between the show’s breaks. Lasting between two-to-three minutes, the music was like a mixture between 1970s cinema advertising and the kind of thing that Michael Bay would use as the score for a space shoot-em-up. Rather than getting me pumped for the next act, it just left me irritated.

Overall however, Friday Night Comedy was an excellent showcasing of The Glee Club’s potential as a Glasgow stand-up venue. The playhouse size of the club offers the potential to accommodate a market between smaller and larger venues, and with that, to expand the range of opportunities for both audiences and performers. As comic Geoff Norcott commented on The Glee Club’s launch in Glasgow, the “showbiz staging” of the club gives it a certain cultural and commercial credit that makes it stand out from other arenas, noting, “it’s the one you invite the in-laws to if you want to convince them you’re doing alright.’ While I’ve noted that there are some negatives when compared with smaller venues, its positive reputation among British comics and audiences places The Glee Club in an enviable position to build a prominent platform for professional shows. I feel that as Friday Night Comedy continues, it will continue to tighten its line-up in a similar way to The Stand, and in doing so, will mark itself as an increasingly important comic hub in Glasgow.