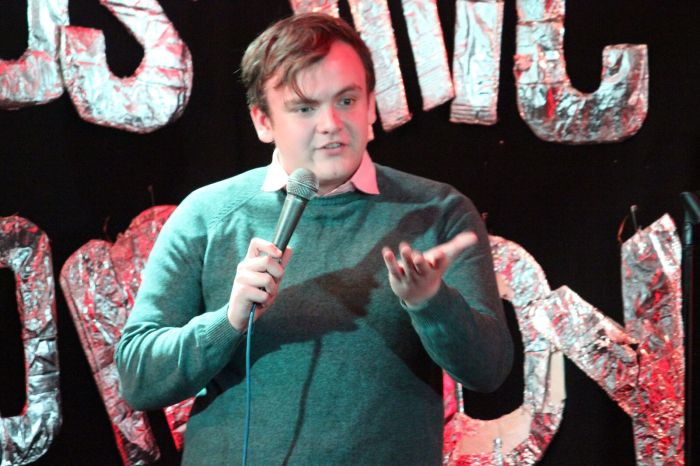 Bubbling with the comedy ebullience of youth, Andrew White is taking his teenage wisdom on the road…

Hello Andrew, so first things first, where are you from & where are you at, geographically speaking?
I was born in Surrey but grew up in Bournemouth where a lot of my family is. Then, for the last ten years I’ve been just outside of Salisbury for schooling reasons. It’s a really lovely area, but nothing ever happens (Russian business aside). On the one hand it means I’ve managed to build a circuit of local gigs without much competition, but on the other hand, most other events are at least an hour away.

When did you first realise you were funny?
When I was cocky little fearless 15 year old. I got up on stage thinking I was hilarious. Ever since, though, it’s just been a spiral into self-doubt and imposter’s syndrome. If I hadn’t started then, I don’t think current me would give comedy a go.

How did you get into performing comedy?
There was a youth performance open mic in Salisbury and I wen along to try out doing some jokes. I’d always loved stand-up and really wanted to do the same as what I watched on TV. As any other comedian would’ve already guessed, the open mic was all music acts and it was a strange environment to tell jokes. Luckily, the woman running it (Flo) was involved in comedy through improv and steered me towards proper comedy environments.

If your style was a soup, what would be the ingredients?
Minestrone in a sieve. There’s a lot going on, and not all of it works for me, but I’m slowly picking out the best ingredients and trying new ones to form the most satisfying soup.

What are the creative processes behind writing your material?
A lot of the time an initial idea comes to me whilst thinking random thoughts to myself. A certain train of thought may make me smile, and then I’ll try and hear myself saying it on stage, and if it sounds workable I’ll write it down. Then development comes from a mix of sitting and writing out, talking it through in my head, and finally saying it aloud at a new material night. Occasionally I’ll write with another comic called Sunjai Arif as well, that outside view on material is always useful, plus he’s very funny!

As a post-Millennial, do you find that comedy is changing, is the material of older comics still relevant?
Comedy is definitely changing, and for the better I think. It’s becoming a much more creative and exciting art form. There’s a focus on originality & well written material, whilst cheap punchlines / premises are rightly being snubbed by industry and audience alike. The material of older comics’ is definitely still relevant, provided it’s funny, engaging, and original. That has nothing to do with age though, that’s just about the calibre of the comedian. In fact, it’s often younger comedians who will deliver “irrelevant” material, just because they’ve not learned that it won’t fly anymore. I could list dozens of older comics who are some of the funniest and most original acts about, but I think the praise would be somewhat tainted with me calling them “older comics”!

What is your ideal Sunday afternoon?
A game of football with friends, and then home to a light dinner, hot bath, and a film.

Can you tell us about the show?
It is all about me wanting to quit stand-up and how university will be better for me. I’m currently on my gap year doing comedy full time, but it’s not everything I imagined it to be, and after one particularly awful gig, I decided that would be that. The show follows on from the gig looking at the benefits of higher education, and asking how much value I could add to the stand-up world anyway. There is some lingering lust for comedy that shines through though, and it becomes more difficult a decision than I first thought…

Where did you get the idea for Retirement Tour, & is the reality realising your original vision?
I had the idea during Edinburgh last year, but it was mainly a provocative joke title. Since then it has changed massively and I’m actually torn between the two paths in real life. From a stupid joke idea, it’s become a very real, very honest, and very soul-bearing show. I’m still living the narrative of it as well, so it’s quite unique – you get to see the decision making evolve in real time alongside my genuine life.

If this is your last year as a comedian – & The Mumble hopes its not, by the way – what the hell are you gonna do instead?
If it is (which it may well be), I’d go to University to study Linguistics. From there, career paths are very varied – speech therapy, marketing, working with the police, all sorts! I may even end up in an entirely unrelated profession. I guess the short answer is, I don’t have a clue!

What will you be doing for the rest of 2019?
After Edinburgh, I’ll probably be starting at Cardiff University. I’m not 100% though. For now, I’m focusing on the show and making it as good as it can be.