Hi Nathan, so where ya from & where ya at, geographically speaking?
I’m from Birmingham and now I live in Hackney in London.

When did you first realise you were, well, funny?
I was about six and it was that atrocious bit at a wedding between the ceremony and the dinner. It was a community hall and I entertained everyone for an hour on the stage. Technically it was my first hour show. I can’t remember the detail but I remember everyone laughing and probably getting emotional at the 40-minute mark when I did a bit about marriage inevitably failing.

Who are your comedy idols?
Growing up it was Rick and Ade, Alexei Sayle, Fry and Laurie and Rowan Atkinson. I’m slightly older than I look (I’m mid to late 20’s). Now it’s Bill Burr, Louis CK, Steve Coogan and anyone on youtube chucking ping pong balls into glasses from a slight distance.

Upon which life-experiences do you draw your own comedy?
I write a new show every year so it’s what’s going on around us now that I’ve drawn upon for my new show – I cover terrorism, politics, Syria, 2 mins on comedy criticism which silly people will say is what the show is about, and of course some obligatory dated references like the death of Dodi Fayed and Rod Hull.

What does Nathan Cassidy like to do when he’s not being funny?
I’m working with the Rat Pack Productions in making other people as funny as possible, working on their shows from a writing, directing and production perspective.

You’ve been performing in Edinburgh since 2010. How do you find performing at the mega-mash-up that is the Edinburgh Fringe?
I love it. Comedy is an addiction, we are addicts. I get no high from performing but if I don’t perform I get low – if I didn’t do Edinburgh in August I’d have to spend the month in Vegas and I’d lose my house (doing Edinburgh I just have to remortgage it).

Each year you tend to come up with a trick or two to convince folk you’re the man to see. Can you elaborate & what’s in store for this year?
No gimmicks this year, promise. That said… I am involved with something a little bit tricksy that is on paper the funniest idea I’ve had for a while, look out for something in the Potterow underpass. 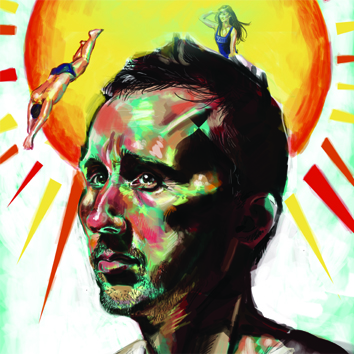 You’re also branching out from comedy into theater this year – 2 shows – what propelled, or perhaps, compelled, you to do this?
I wrote for theatre 15-20 years ago. One of my first Edinburgh experiences was writing a musical ‘DIY-The musical’ about a strip club in 1997. It was on at the same time as the Full Monty and there was a double page spread in the Daily Record of me in red rubber pants. So probably the thought of that happening again spurred me on. In seriousness, something happened to me recently which made me think that a perfect love story that has happened in my life was something I wanted to talk about, and it didn’t quite fit into stand-up so I’ve done it as a one-man theatre show. People’s reactions so far have been really satisfying, people have said I really talk to them on a deeper level, and am saying things about love and life that they have been thinking but never voiced. You never get these reactions with jokes about Rod Hull.

What is it about performing live you love the most?
That, more often than not, what happens is down to you. In stand-up and one-man theatre, people’s experiences are pretty much down to you. If it’s great it’s because of you and if it’s not you have no one and nothing to blame. Apart from maybe the hot room, the weather, an annoying heckler or cocaine.

Can you sum up your two shows this year in a single sentence each?
My stand-up show is about bravery in a volatile world. My one-man theatre show is a perfect love story in a swimming pool.

What does the rest of 2017 hold in store for Nathan Cassidy?
Ooh, by the end of the year I’ll be doing scratch performances of my new stand-up show. I can’t say too much yet but I fear the subject matter of this one is going to welcome in the death of my career. So I’ll try to rescue it by writing another one-man theatre show for which I will no doubt be digging out the red, rubber pants.

Nathan Cassidy will be performing twice a day throughout the Fringe;

WATCH ME. LOVE ME. ITS DEEP. (theatre)

THE MAN IN THE ARENA

One thought on “An Interview with Nathan Cassidy”